Working Inclusively with Outcomes that Matter 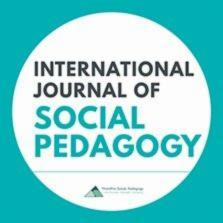 This article will provide an illustration of the way in which St. Andrew’s Project, Camphill Aberdeen works with an outcomes measurement framework termed ‘Outcomes that Matter’. Therapeutic support is negotiated with children, their families and supporting agencies following a comprehensive ecological assessment. The intended outcomes for any short or medium term intervention are then agreed with those involved. Achievement profiles are drawn up with each young person on a weekly basis, forming the basis of an outcome-based intervention plan. An example will be provided of recent work with a young person, in which the ‘Outcomes that Matter’ recording format was used collaboratively when working with a particular practice issue.

The origins of the St Andrew's Project lie in the original vision of Camphill as a place of mutual learning where change processes are facilitated through relationship. We aim to do this by supporting the people in an individual’s ecology to shift inwardly and adapt and through this come into a more positive relationship with each other and with the child in the centre. This fundamental perspective resonates with the Circle of Courage model of meeting four fundamental growth needs for belonging, mastery, independence and generosity that in turn provides the underpinning framework for Outcomes that Matter© (see Fulcher & Garfat, 2013). This systemic understanding also underlies the core premises of the Getting it Right For Every Child (2005) agenda in Scotland, which emphasises the improvement of outcomes for children, young people and their families and considers the way in which their well-being is influenced by both internal and external factors.

Individualised therapeutic support is negotiated with children, their families and supporting agencies following a comprehensive ecological assessment. This is a strengths-based assessment drawing on Bronfenbrenner’s (1979) ecological framework, which considers the interrelationship between the individual and their environment. Consequently, we speak with as many family members as possible and crucially with the young person her-/himself as well as with teachers and any other professionals who might be involved. We also aim to gather additional information by reading previous reports and assessments.

The intended outcomes for any short- or medium-term intervention are then agreed with those involved. Achievement profiles are drawn up with each young person on a weekly basis, forming the basis of an outcome-based intervention plan. Family members are asked to commit to weekly meetings with individual St Andrew’s workers so that we can think through situations together as they arise.

The frameworks that are commonly used for assessing children and young people’s needs can leave children, their families and those who work with them dissatisfied for two reasons. They seem to only capture a child’s inabilities, their deficits and often appear to have little relationship with the daily work of practitioners. Within the St Andrew’s Project we have often experienced that children and their families can easily feel devalued, isolated and confused through overly medicalised assessment processes. This was the case with Darren (not his real name), a twelve-year-old who had experienced a range of different professional assessments and interventions in his short life. On reading the reports in the process of forming an ecological assessment we were struck by the way in which differing accounts tended to focus on how to manage his challenging behaviour, highlighting his poor impulse control and disractibility. In turning the spotlight on his deficits in this way the professional accounts ran the risk of erecting further barriers between Darren and his family and the ‘expert’ systems surrounding them.

As mentioned earlier one of our fundamental beliefs is that the environment becomes truly inclusive when children and young people feel respected and sense that it is a site of mutual learning. All carers (including family) need to constantly reflect and adjust their approaches, realizing that often it is the systems around an individual that need to change rather than the other way around. Consequently we tried to ensure that Darren would lead the process, in the sense that his needs would be in the forefront all the time. In conducting the ecological assessment we took a lot of time to build up a picture of how Darren saw his ‘world’ as well as how the ‘world’ viewed him and most importantly how the two interacted. After conversations with him and his family, his teachers and other professionals we began to form a picture of his ‘world’ that was underpinned by the Circle of Courage. The assessment concluded that Darren

‘… is struggling with a weak sense of belonging ….., feeling devalued and isolated. This has central implications for his ability to develop a sense of mastery and independence in daily life and consequently he is unable to reach out and engage with others in a generous spirit. However, Darren does not struggle with this in isolation as the whole family is also challenged by the situation and is experiencing high levels of stress’.

Every week Darren’s carer sat down to fill out the Outcomes that Matter recording instrument, involving him where possible in considering key moments from his past week. In place of the unstructured and somewhat haphazard recording that so often fills young people’s files, this asks for a ‘memory scan’ of the past week leading to the identification of meaningful and significant moments in a young person’s life. These are the small but vital details of someone’s care that can be easily overlooked but which are often more important for young people and their families than the more abstract outcomes set out in care plans. In filling out the Outcomes that Matter form the carer and young person therefore gather a valuable record of strength-based moments of achievement. For example in the Mastery section we recorded under ‘Actively Engaged in Learning’ outcome that ‘He made an “angel” stone in the sculpture workshop, and, while doing so, he interacted with other pupils’. However, as the framework also traces the quality of the environment we provide, there are also external outcomes such as ‘Supportive Environments’, where the same week it was recorded that he ‘Was praised after horse-riding for doing an excellent job with the exercise he was given’. Each outcome is then graded on a scale of 0-4 depending on how often moments of a similar quality occurred during each week, and this can then be translated into a graph such as that included below for Mastery over a twelve week period. 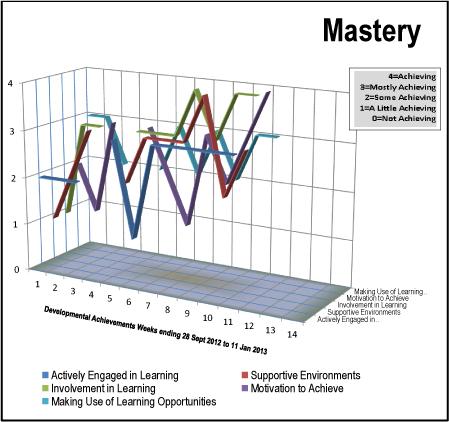 After a few weeks of working with Darren and his family it became apparent that his sleeping rhythm was a big issue. His mother reported that he would remain awake in his bedroom playing computer games etc. until 2 or 3 in the morning, and we experienced that he was obviously exhausted the next day, falling asleep on the sofa. His mother had tried various approaches but told us that nothing worked. In thinking this through with her we tried to help her to identify possible solutions. Gradually she began to make suggestions, and, as the conversation developed, we were able to discuss possible changes in the family’s approach. Things did not immediately get better: in fact, as they began to adopt a different approach, everybody went through what his mother described as a ‘week of hell’, as Darren and everybody else needed to adjust to the change of routine. The Outcomes that Matter framework captures this period: one can trace a clear drop in ‘Planning and Decision making’, ‘Active Engagement in Learning’ and ‘Motivation to Achieve’ in week 5. However, one can also see how all these outcomes steadily improved in the next weeks as Darren felt increasingly rested when he came to the project. In discussing his progress with his mother in the light of the evidence from the graphs, she made the interesting observation that in the past she had experienced a lot of chaos and confusion around Darren, with people in different systems in conflict with each other. As all this was going on in their life, she hadn’t felt able to effect any changes in the family routines, but now that things were going so well for him she was able to establish different patterns at home.

This example illustrates the potential of Outcomes that Matter when embedded within an ecological approach. Because we were able to support Darren’s growing sense of belonging and mastery at St Andrew’s, we could build on this in conversations with his family so that they felt able to shift their approach at home. In this way the strengths being developed in one area of his life could have a positive impact on home life almost like a ripple effect. Outcomes that Matter recording had a central part to play in this work as it enabled us to share information across the different settings in Darren’s life and to develop common approaches. We could note his achievements together and explore the changes we needed to make when his progress stalled; this in turn enabled a more strengths-based and purposeful involvement of his family. In this way we began to support individuals in the different systems to re-connect with each other, which in turn had a positive effect on Darren’s growing sense of well-being.

St Andrews Project’s work with Outcomes that Matter is still in its very early stages, but we are gradually making more and more positive experiences of its inclusive potential when located within a systemic approach. Its value for our work lies in its strengths-based, relational, lifespace orientation, but at the same time this is also its fundamentally challenging aspect. In order to work in this way, it is extremely important that carers take the time to really listen to children and young people, so that they can capture their experience of the week and moments that were meaningful for them. We have discovered that this is a learning process for everybody concerned as it does not come naturally to us to capture subjective moments without imposing judgements and interpretations immediately. We are challenged in this way to remain ‘experience-close’ so that we can gain a sense for how the individual really sees their life world. However, once people begin to practice working in this way they become aware of countless moments in every week. These then can become a valuable basis for individual and team reflection as we think together about the ways in which everybody needs to adjust to meet an individual’s needs.

* Chris Walter has worked in Camphill for more than thirty years both in educational and care settings. Since 2005 he has been significantly involved in the development and administration of Camphill’s BA in Social Pedagogy run in partnership with University of Aberdeen. He works as a practice teacher on the course and is particularly interested in finding new ways for academic learning to inform and develop practice. He also recently completed the MSc in Advanced Residential Childcare examining the impact of organisational culture on understandings of impairment and disability. Over the last four years he has been involved in developing the work of St Andrew’s Project.

This work is licensed under the terms of the Creative Commons Attribution-NonCommercial-ShareAlike 3.0 Unported License (CC-BY-NC-SA) 3.0 https://creativecommons.org/licenses/by-nc-sa/3.0/, which permits re-use, distribution and reproduction in any medium, provided any modifications of this material in anyway is distributed under this same license, is not used for commercial purposes, and the original author and source are credited